Several days of fantastic weather! It had been rainy earlier in the month along with the occasional freak snowfall, but not this weekend. There were times that a jacket wasn't necessary.

The recently acquired 4-wheel drive fork lift had a few discrepancies which had been noted at delivery. The two highest priority items were the foot brake not working (yikes!) and the other was the 4-wheel drive engagement mechanism was not working reliably.

Roger R's first assignment was to get the brakes working. The problem was traced to a gummed up master cylinder. There was evidence that the fork lift had not had its brake fluid changed in a long time. Since fork lifts often work in dusty environments, the dust had infiltrated the seals on the master cylinder and formed a concrete-like substance which kept the unit from working.

The second assignment was resolving the 4-wheel drive problem. Rex F and Roger R worked on this for quite a while but it isn't known if they came to a conclusion or resolution. There is evidence that a controller circuit board is not doing what it should. 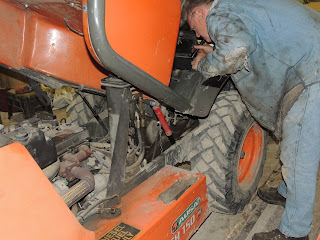 Dave O. had arrived on Friday night with his son, Kendell and a trailer load of steel tubing and rail. The first task Saturday morning was to unload the trailer. Using the skid steer, Nathan V and Randy V were able to get all of the steel off the trailer and load it to the proper storage areas around the MCRR shop. 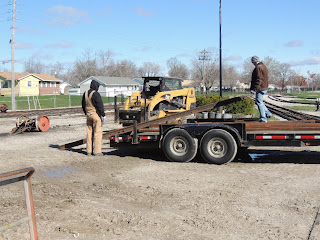 The main spring cleanup project around the shop was to get the locomotive fuel oil under control. During the previous season, we were able to collect a number of totes full of oil. Some of the oil was pumped into the two locomotive tenders but a good portion was awaiting use in the totes.

Before the transfer from the totes to the large storage tank could begin, the containment area had to be drained of the recent heavy rains. We have a submersible pump to empty the water but the drain hose had fallen off of the pump casing. Elsie B, Ryan F, and Matt W quickly repaired the hose connection and started the pump. 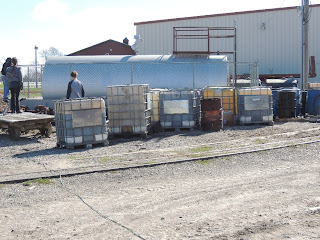 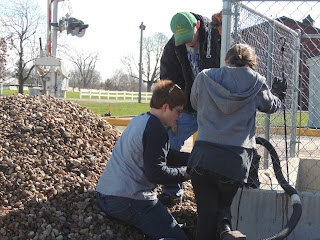 After getting the pump working, Elsie B, Ryan F, and Matt W spent a good portion of the day pumping the content of the totes into the large storage tank and moving the empty totes to various locations on our property. 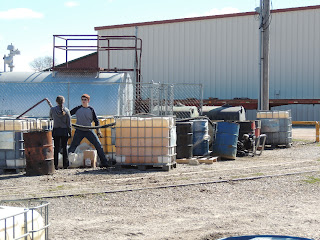 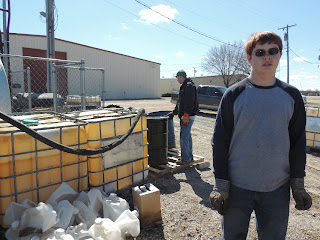 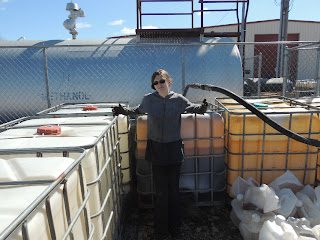 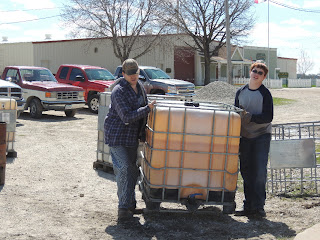 How did that get up there? 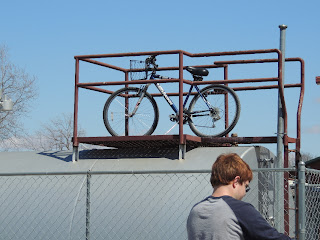 Matt W stepped inside the shop to find Matt C and Kevin S having a chat about some unknown topic. We are sure it was important. 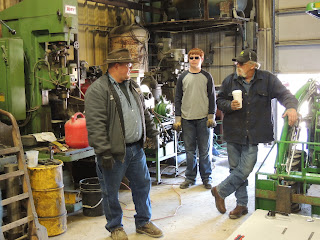 Meanwhile, Brian B continued his stenciling project on the DRGW boxcar. Last month he had copied most of the small lettering from the "good" side of the boxcar. This month, he dealt with the large lettering on the upper portions of the boxcar. 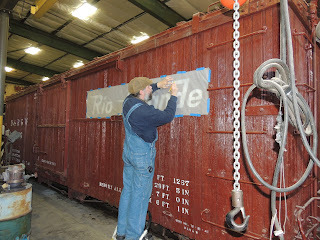 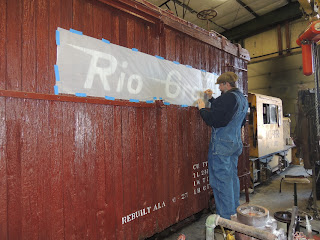 Kendell O, Wayne P, and Braden G cleaned up the drivers for No. 2. Having been buried in the mud for so many years gave the team a chance to get familiar with the pressure washer. Portions of the wheels were so encased in mud that some manual scraping was necessary. 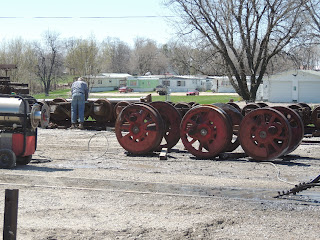 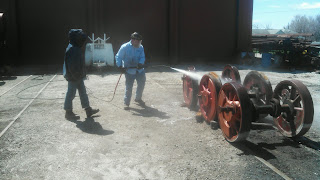 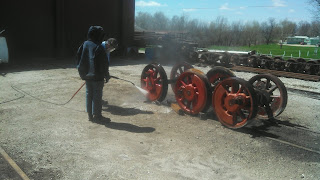 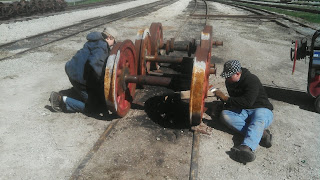 Not pictured is the activity in the South Station and Museum "B."

Every North Pole Express, the coach windows are treated with translucent plastic to aid in the experience of travelling to the North Pole. Our summer travelers do not care much for the North Pole Express look, so the plastic needs to be removed. Jerry C and Mike N spent several hours peeling the plastic off the windows. Deb C was keeping the gift shop and M&E room under control and preparing them for the upcoming season.

The Midwest Old Threshers are kind enough to allow us to store much of our equipment in their Museum "B" while North Pole Express takes place. However, when the school tours start in the spring, we need to get our "rougher" rolling stock out of Museum "B" and into our South Station. Several switching crews moved the various pieces around to give Museum "B" the correct look.