During this late August weekend, a few members gathered in the shop to get the Nine and Sixteen ready for use.

In July, the Nine had resisted efforts to allow the annual hydrostatic test. The superheaters were leaking, but shouldn't have had water in them in the first place. The gushing superheaters dictated that the spool valve and connection to the dry pipe be inspected, but that required the steam dome lid be remove for access. The steam dome fought us all the way and wrecked two 1" studs in the process. The beat up studs resisted all efforts to be replaced.

Jesse V and Griffin W tried where others had failed to remove the studs...and succeeded! It is understood by this author that the other 28 or so studs are slightly bent and need to be replaced. The pictures here show the team working on the known bad studs. 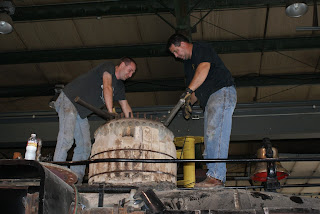 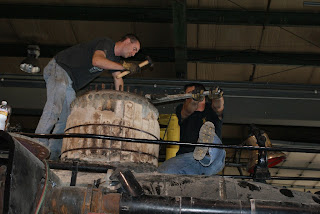 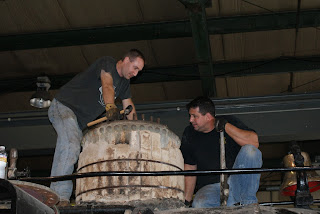 While J and G were removing the studs others were readying the Sixteen for this year's OT Reunion. Dustin B and Abe C are seen oiling the bearing journals. Cheering them on is Braden B. 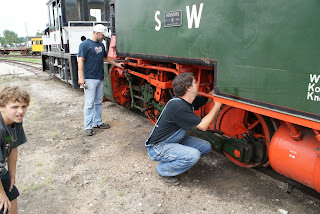 The "other" Braden, Braden G, is putting the grates into the 16's firebox. Every year, at the end of the season, the grates are removed to allow for thorough cleaning of the firebox. 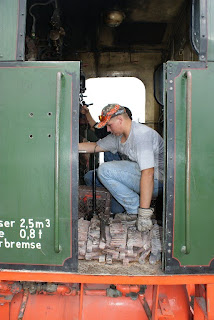 As Dustin sticks his hands into the undercarriage of the 16, Abe steadies the locomotive while Dallas K. calls an unidentified person. 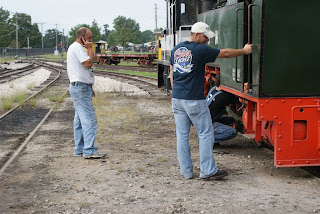 Braden G smiles as he pauses during the grate replacement task. 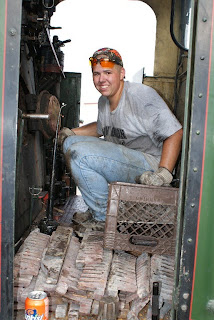 Abe has his hands inside the 16's firebox. Exactly what he is doing is rather curious. 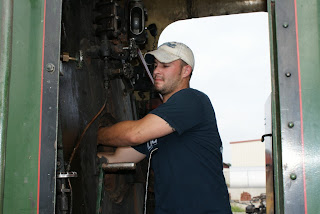 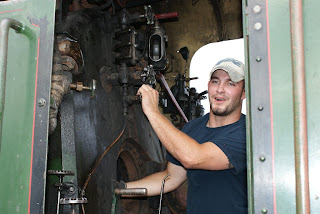 -steam.airman
Pictures courtesy Jennifer B.
Posted by From the Shop at 23.8.10

On yet another steamy August weekend, the volunteers at the MCRR continued their primary restoration project, the reassembly of the Six. The general procedure is "pick something off the flatcar and put it back on the Six."

Not long ago, the air brake parts were sent to a rebuilder in Pennsylvania. The parts are due back at the shop very soon.

Abe C. and his dad, Eric C., finished the machining on the dry pipe for the spool valve and were able to get the whole affair back into the boiler. While it only takes a few words to describe what they accomplished, it took nearly a hundred hours of labor to complete the work.

During this work weekend's Friday evening, Dustin B. and Elliot H. mounted the mechanical lubricator and the two running boards onto the chassis.

Another seemingly trivial project was getting the bell onto the boiler. With the increased diameter of boiler jacket, the bell mount (like nearly everything else) didn't fit. Elliot H. made various modifications to the mount and Dave O. "lengthened" the studs to accept the modified bell mount.

Abe C. and Elliot H. also completed the modifications to the boiler jacket on the unit's left side to accommodate the air compressor. With the help of Walt O., the air compressor was ready to mount onto its frame by late Saturday.

With the dry pipe in place, another opportunity arose. The new dry pipe didn't protrude into the smoke box as far as the previous dry pipe incarnation. The length change caused the pipes leading up from the steam cylinders to not meet the manifold which connects to the dry pipe!

With the skills of Dave O., the problem was "easily" resolved. The dry pipe/steam cylinder connector pipes were sliced in two and a steel "doughnut" placed in the gap. Unfortunately, the aged manifold attached to the dry pipe broke when the connecting pipes were attached. As of the close of Saturday, the plan was for Dave O. to fashion a new manifold from boiler flanges and steel piping. We should see the finished product in a week or so.

The connector pipe with the slice, awaiting the steel doughnut to fill the gap. 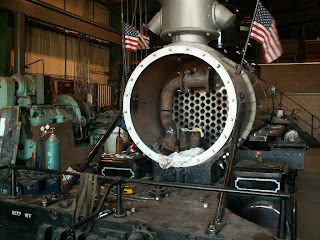 Nathan V. hands the MIG welder gun to Dave so he can tack weld the steel doughnut into place. 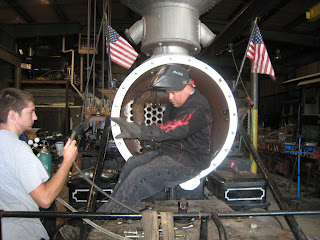 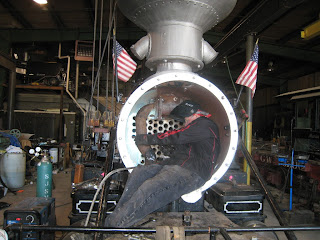 Dave O. grinds a bevel into the connector pipe to facilitate welding. 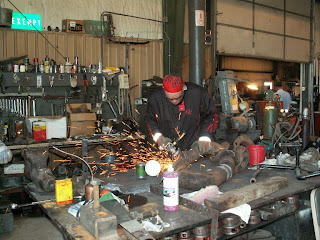 Randy and Nathan V. cut a doughnut from a piece of 4" diameter steel pipe. 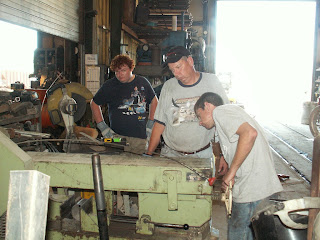 Several members look on as Dave O. explains to Nathan V. what needs to be done inside the smoke box. 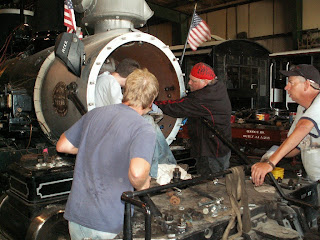 While work was going on in the front of the locomotive, Abe C. crawled inside the firebox to measure it for the fire brick purchase. 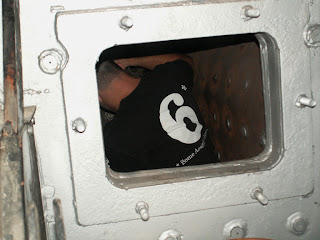 It might look the boiler is giving birth, but it is really Abe C. crawling out of the firebox door after measuring the inside. 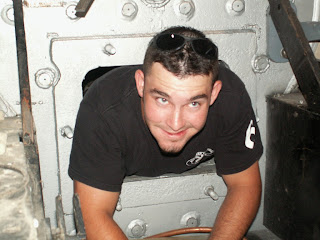 Besides altering the size of the bell mount, the boiler jacket needed a bit of adjusting. Elliot H. uses a flap disk on the angle grinder to remove jacket material which provided for the proper fit of the mounting bracket. 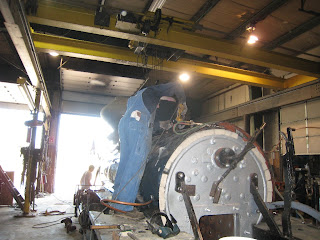 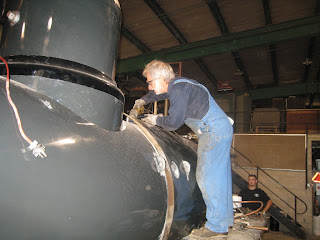 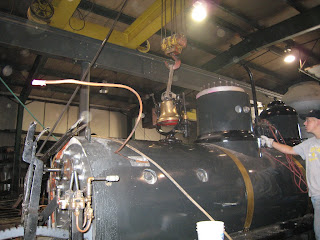 Mounting the bell on the modified bracket. 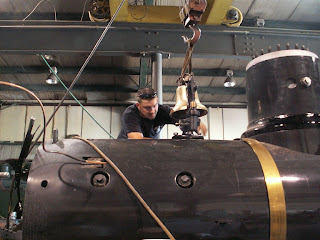 To make the boiler jacket fit properly behind the air compressor mount, we had to make some new fasteners. Abe C. drills the holes for a nut plate which will be used to hold the jacket sections together. 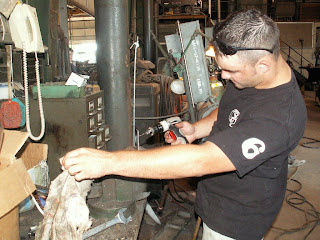 -steam.airman
-Some pictures courtesy Brian B.
Posted by From the Shop at 23.8.10