After 4 1/2 years, the Case backhoe's batteries gave up. Oddly, this backhoe was built at a time when the manufacturer was experimenting with something other than a heavy-post battery or a side terminal battery. This one had a pair of top stud batteries of which no one in Mt Pleasant, except for the Case dealer, knew anything about. "We can order them..." We opted for converting the backhoe to the more common top post battery but that required getting some converter gadgets. A 30 minute job ended up taking several hours.

Roger R. removes and replaces the batteries while Elliot H. rests peacefully in the cab of the backhoe. 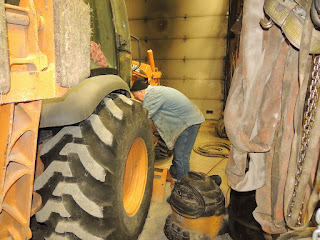 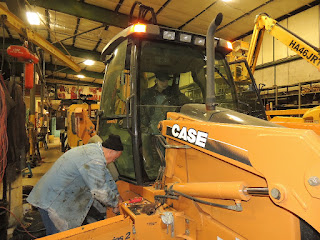 The workhorse No. 14 has been out of service for a while due to a finicky air compressor. This down time was put to good use with Chris P. installing a cab heater, which like a car, runs off of hot water from the engine's cooling system. The center shroud covering the transmission is being rebuilt, having finally fallen apart after several decade's use.

Oh...and Dave O. continued the investigation of the failing air compressor. There are no obvious leaks in the air brake system, so our attention has been focused on the air compressor and its regulator. There are signs the reed valves which control the compressor's pumping ability are not seating. Dave O. will bring the cylinder head to his workshop for repairs. 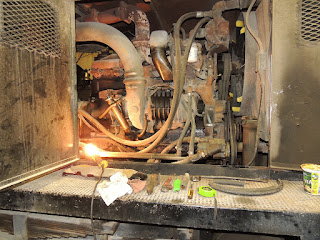 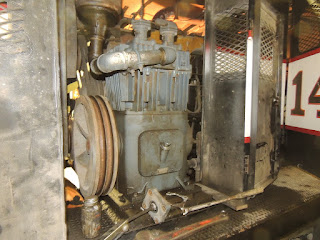 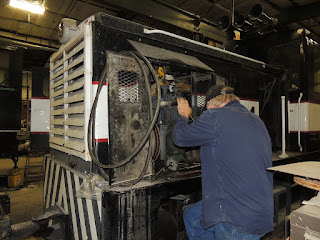 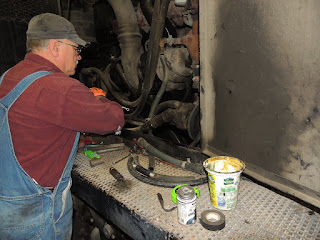 We disassembled No. 12's single stage steam powered air compressor. Roger R. and Rex F. unbolt the steam cylinder head attempt to lift it off with muscle power. That didn't work very well, so the over head crane was used to lift it up and away. Well, almost: a small connecting rod within the steam cylinder prevented the head from coming off. Using the appropriate service manual (yes, our office has service manuals for this old stuff!), we learned the rod has to be pushed out of a keyhole-like slot in order to remove the head. 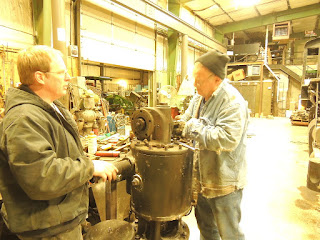 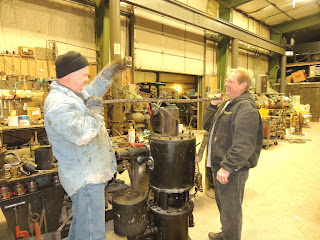 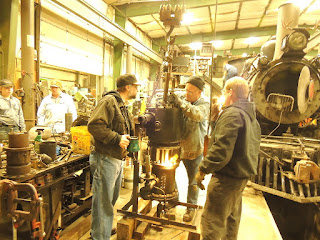 Meanwhile, the cleaning of No. 12 started. Matt W. spent a few hours last month removing some surface rust on the connecting rods. This month he started cleaning the sheet metal and some of the other bits of piping on and around the locomotive. 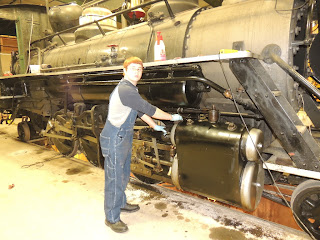 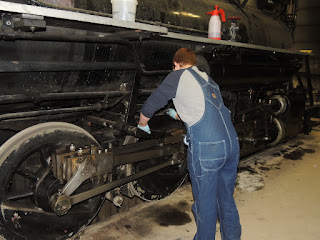 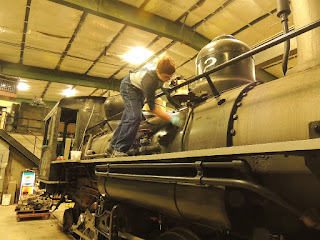 There were a few places where pipes blocking the way required somebody with smaller hands and arms. Enter Elsie B.! She was able to get into the spaces that had been blocked from Matt. 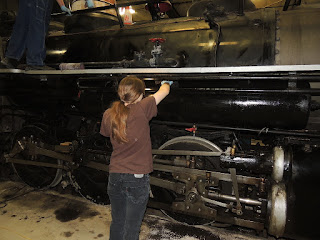 There is a massive amount of real estate on No. 12. John G. (not shown) and Melissa B. cleaned the fireman's side of the locomotive. 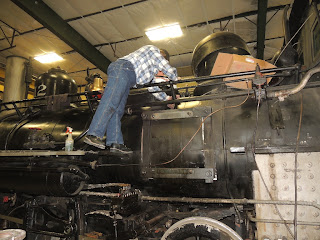 The engineers were not satisfied with the steam throttle operation of No. 12. Last month, we removed the throttle valve and linkage with the intent of installing a genuine Baldwin spool valve and body. 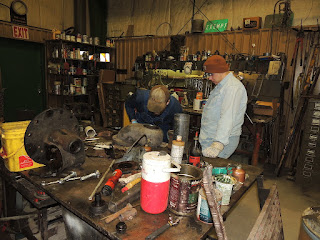 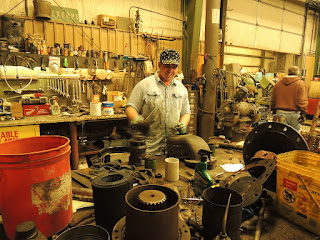 We expect to do ultra sound thickness testing of the dry pipe. The testing requires a locomotive mechanic to get inside the boiler and crawl along the top of the flue pipes taking periodic measurements. Matt W. and John G. slip into the steam dome to vie for the privilege of crawling on the flues. Several people were offered the job but graciously declined. ("Are you mad? I'm not going inside there!") 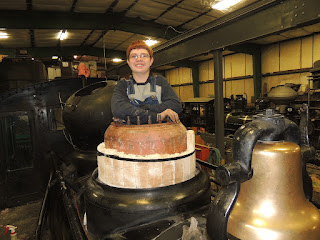 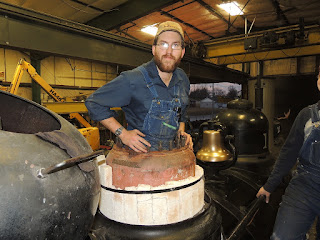 After taking No. 12's air compressor apart, we determined there were so many problems that installing our spare cross compound compressor was prudent. Overhauled long ago by "Shop Services," we extracted the compressor from its spot on the south wall of the shop. Matt C. gets a chance to use the newly acquired fork lift to move the parts that separated the compressor from the fork lift. 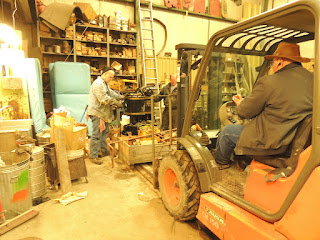