July often gets the benefit of two work weekends; the weekend surrounding the "second Saturday" and the weekend closest to the country's Independence Day celebration. The blogger was there for the latter therefore there is lots of photographic evidence for that event -- but not so much for the former event.

With the painting of the shop imminent, it was noticed that our 50 foot flagpole looked dismal. After many years of service, the paint was either rusted through or dulled so much that it detracted from the appearance of the north yard.

On Friday night, several MCRR members dropped the pole to horizontal. The original installers recognized that occasional maintenance was necessary and fabricated an easy to use tilting base plate. Using the Case backhoe, it was an easy task to lay the pole over. Darkness prevented doing anything more than laying it over. The rest of the work had to be delayed to Saturday.

A particular nuisance to getting the pole away from its base and the base away from its concrete mount was the thick hedge that had grown up over the many years. Paul K. uses a large pruning shears to gain access to the base's mounting studs. 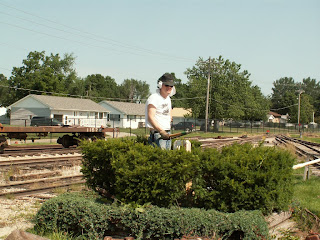 With the hedge cut down to size, Dallas K. and Paul K. discuss the next step in the pole's removal. Notice the shop's north face in the background; the "MIDWEST CENTRAL RAILROAD" sign is totally gone. Have a look at the previous blog entry and you will see why!

The staff used the skid-steer to pick the pole off the base and scoot it over to the shop. Once it was partially in the shop, the pit track's overhead crane was used to move the pole around in the building. 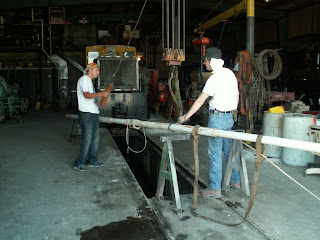 The base was as nasty looking as the pole. After the base was removed from the concrete mount, Wayne P. used the shop's sand blasting equipment to get the base ready for painting. 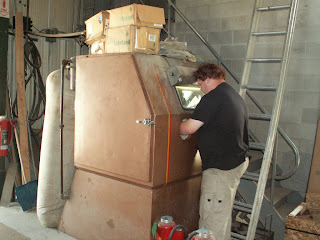 Meanwhile, the Six needed a bath to remove the winter's dirt, so it was an opportune time for Dallas K. to use the power washer. 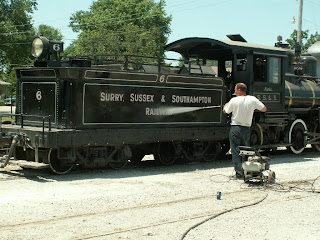 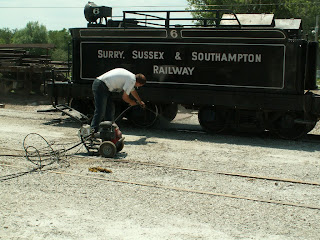 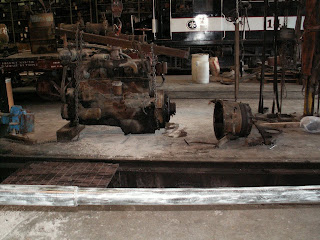 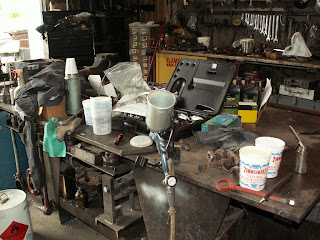 The base and pole were coated with Valspar self etching primer.

This long view of the flag pole shows how much it drooped while in the "spray booth." The pole consists of what looks like 5 sections of Schedule 80 pipe welded together. 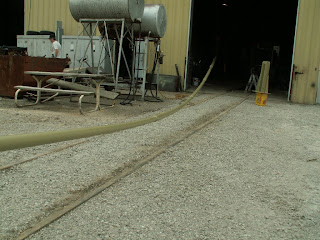 With the self etching primer complete, the pole and base received two coats of Valspar two part polyurethane paint. Look closely at the color; what else is using this paint? 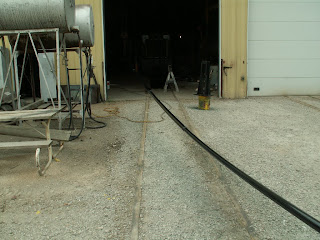 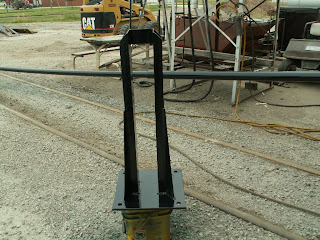 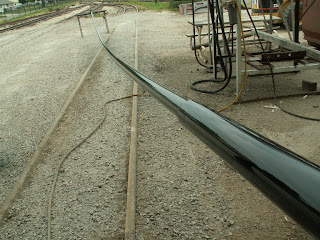 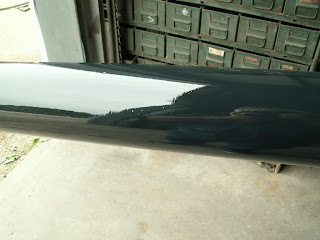 Another project with high priority was the repair of the air brake pipe support, hand rail, and steps on the "Quinn Coach."

Sometime last year, the air brake pipe had broken loose from the support which let it dangle a bit to close to the ties and rails. It had received a temporary patch when first discovered, but something more permanent was "highly recommended." The hand railing was pulling away from the coach wall. The steps needed repainting.

Paul K. removes the hand railing from the coach in order to repair the wall and re-attach the railing. 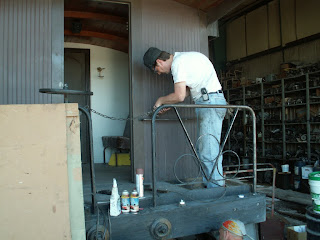 While Paul K. works on the railing, Dallas K. removes the broken support bracket for the air brake pipe. 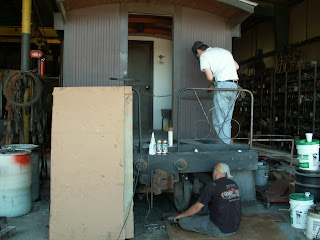 The blogger heats what will eventually become the new support bracket. Heating is necessary to bend the steel strap to the appropriate shape. 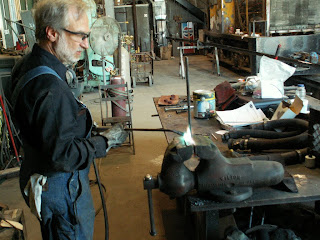 Dallas K. test fits the strap on the end beam of the coach. 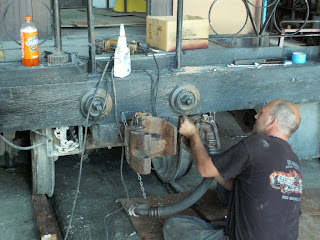 Later in the afternoon, Matt C., Roger R., and Braden G. discuss what is necessary to fix the leaking o-ring in the D-9's torque converter. (Notice how clean the work table is for the torque converter repair?) 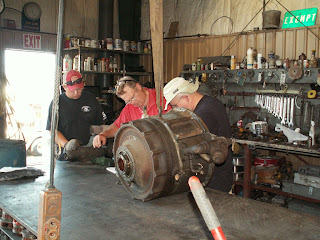 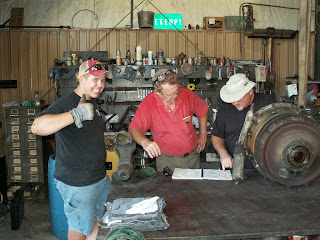