The work weekend started a few days early for a few of the MCRR volunteers.

While awaiting the 6's boiler, numerous hours have been invested in the D-9. If you scan through the previous blog entries you will see what progress has been made.

To summarize what has transpired, starting about this time last year, the sheet metal and various parts surrounding the engine and torque converter were removed. During the summer of 2009, the engine/TC was removed and the innards of the torque converter were placed into the new crack-free housing. During the 2009 Old Threshers' Reunion, when the engine/TC was installed and tested, another leak was discovered that, unfortunately, requires R&R of the engine/TC unit. (Plans are afoot to repair that leak; we should see the D-9 moving under its own power fairly soon.) Meanwhile, an idle volunteer sandblasted nearly all the loose D-9 parts and others started the paint removal and refurbishment of the cab. In November, 2009, the loose parts were primed. During the last few months, the rotted sheet metal on the cab has been replaced and the installation of a train brake system was started.

So what happened to it this month? The cab repairs were completed and the air brake system was completed. Plus..."Bad Kitty" attacked, as shown here, leaving her signature portrait on the sides and rear of the engine! 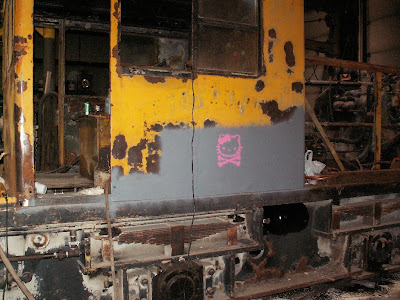 As one might expect, tinkering with the air brakes didn't require the expertise of everyone, so other things did occur.

No pictures or details of exactly what was accomplished at or around the South Station can be given here; this reporter was busy in the shop (and fooling around at the Mt Pleasant airport!) and was unable to document what was happening "over there." Perhaps someone with the coaches was taking pictures and can supply them and text for me to insert into this blog entry. 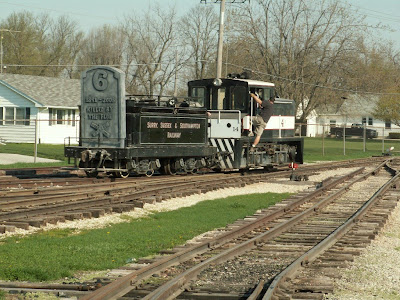 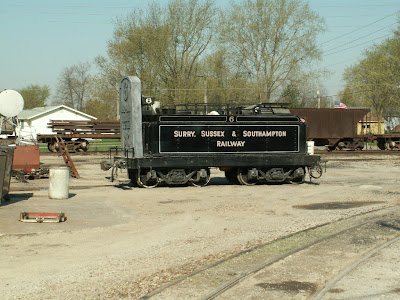 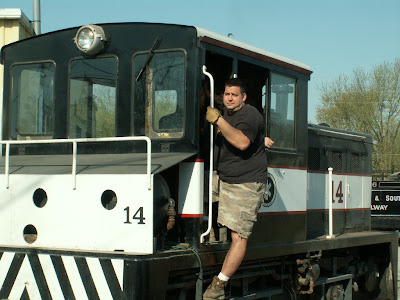 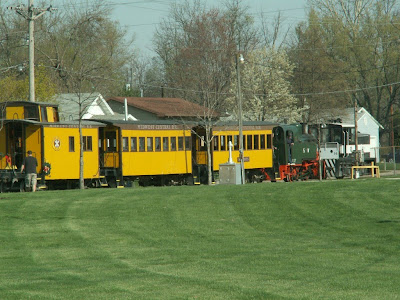 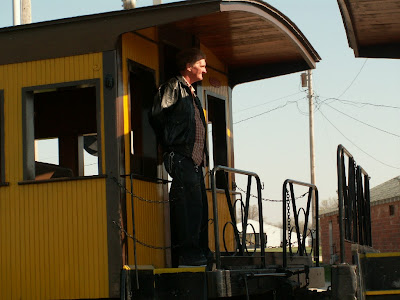 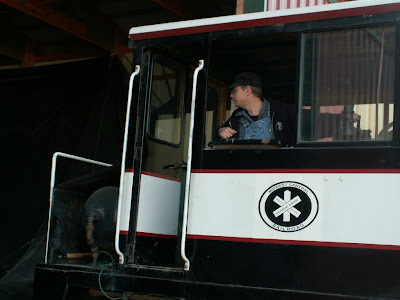 Outside the shop, along the mainline tracks west of the road, a group of volunteers corrected a long-forming problem: the rails had developed a negative camber, with the outside rail lower than the inside rail.

What should have been a "quick" project turned out to last long after nightfall. Besides needing to jack the ties and rails, a large number of ties needed to be replaced.

Replacing (spotting) ties has been made much easier than ever before with the special bucket on the Case backhoe. The bucket is exactly the width of a tie and with two strokes the old tie is knocked out and a new tie pushed into place. Contrast that with using the skid-steer, chains, and tie-tongs!

The next bunch of pictures show the staff moving the ties about, spiking the rails to the ties, and tamping the ballast into place. 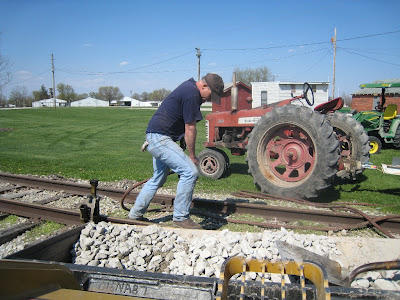 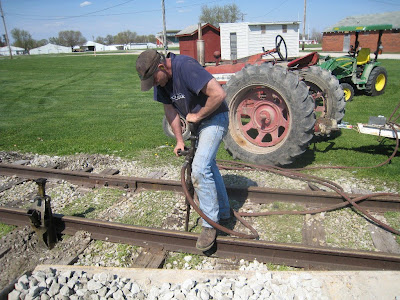 Volunteer John W holds up a shovel as the others do all the work. 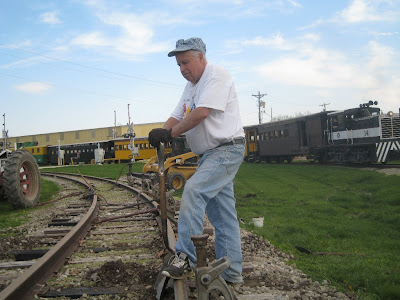 Griffin walks between the matt-tractor loaded with ties and ties laying on the ground. 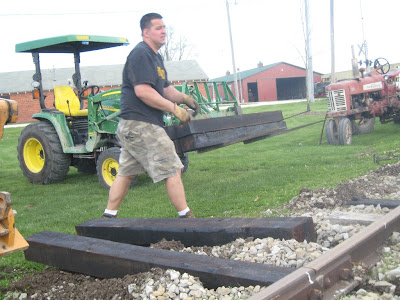 John W holds a rail in place while Griffin moves some ballast out of the trench where the new tie will be tucked into place. 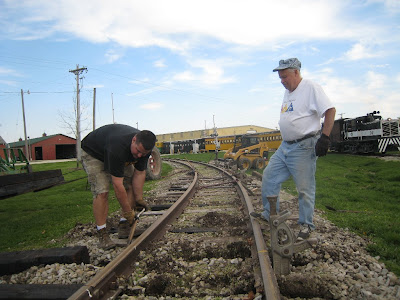 Trying to decide what happens next. 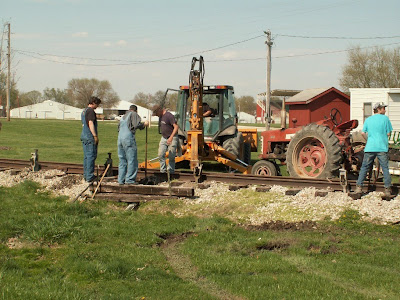 The special bucket is clearly shown on the Case backhoe. The bucket has an official railroad name but I haven't a clue what it might be. 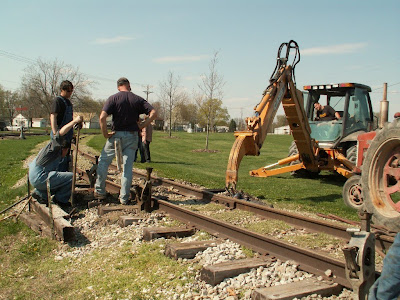 Dustin B and Chris C watch as Griffin skillfully moves a tie under the rail with the Case backhoe. 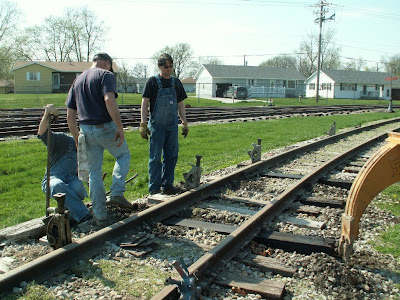 That's Griffin carefully manipulating the controls of the Case backhoe. 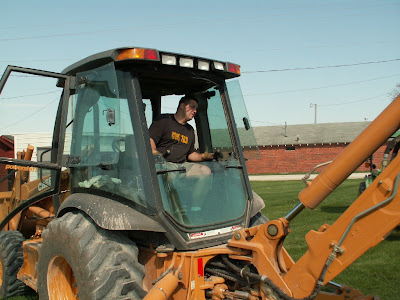 Brian B (squatting) and Dustin B watch intently as Chris C pries the end of the tie in place. 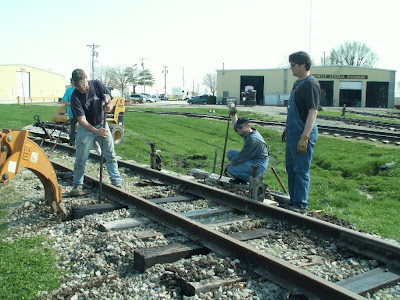 A few more nudges with the bucket and the tie is ready for spiking. 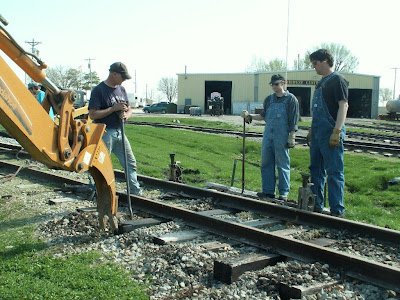 Dustin B taps the tie plate square with the tie before spiking. 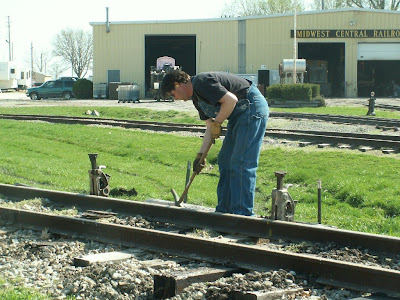 Dustin B has a few words with the Case backhoe operator. 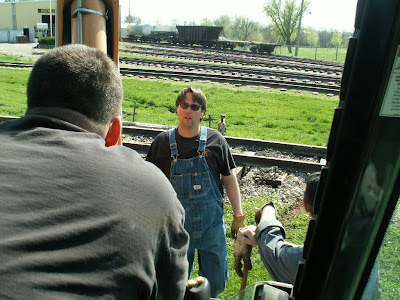 Brian B lifts the rail so Dustin can get the tie plate under the rail. 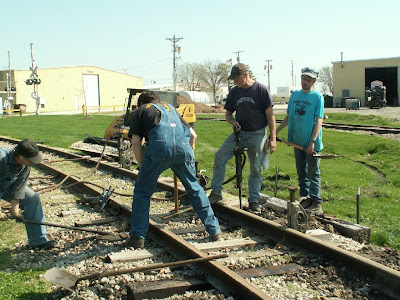 The Plymouth switcher 14 basks in the sun. 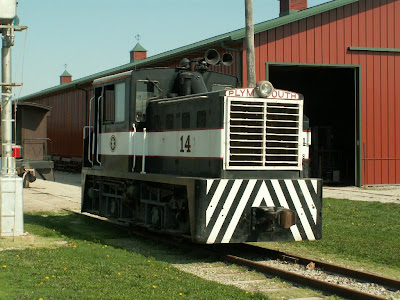 John W, Jerry C, Lindsay R and Lindsay's aunt (yikes! her name escapes me at this second!) chit chat outside the South Station. 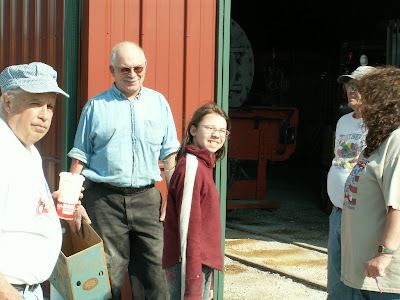 Back at the track project, Chris C pounds a spike into place. 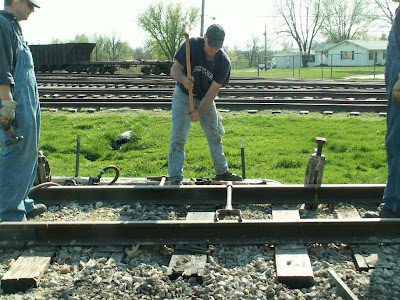 Apparently untrustworthy with a large hammer, Brian B starts a spike in the tie with a tiny hammer. 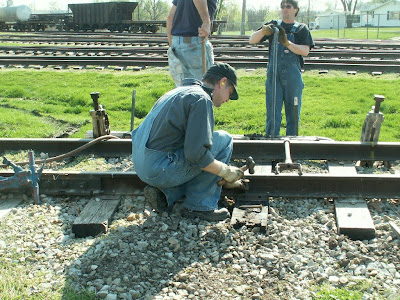 Chris C uses a pneumatic ballast tamper to pound the material under the tie. 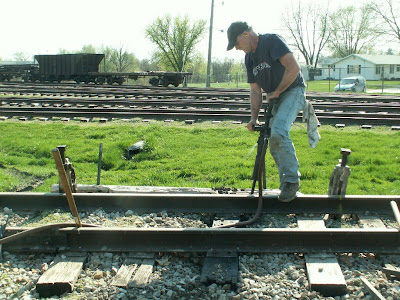 As the tamper pushes ballast under the tie, additional ballast must be shoveled into the hollowed out space. Each tamper operator requires the full time service of a ballast shovel operator. 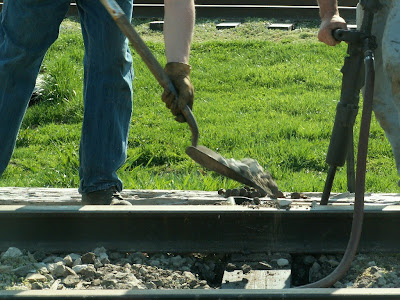 His work complete at the South Station, John W walks to the track project site. 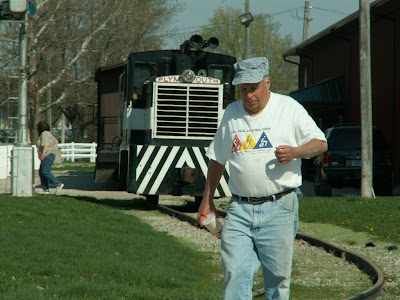 Director Dave R pilots the fork lift back into the shop. 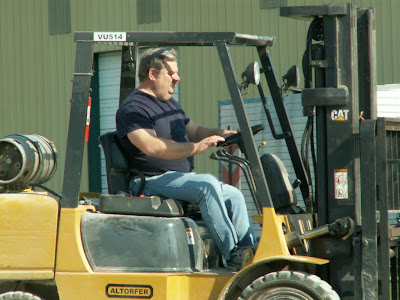