There wasn't too much snow on the ground, but it sure was cold!

We had a good turnout at the first work weekend of the year. Besides the maintenance on the hardware, the MCRR Annual Meeting and monthly Board Meeting took place.

In the shop, No. 12 was the main thrust of the volunteers' efforts. The following series of pictures will give you an idea of what we worked on.

Not pictured is the clean-up of No. 12's connecting rods. During the December boiler washing, we gave the engine a quick pressure-wash in order to get some of the larger chunks of mud off the steel. Unfortunately, the stream of hot water also took off the oil film that protects the rods from rusting. Matt W., using a fine scouring pad and some diesel fuel, removed the surface rust and bits of grease from the rods leaving them bright and shiny. When he was done with the clean-up, a thin coating of diesel fuel was sprayed on the rods which should keep them (the rods, not Matt!) from rusting.

Last summer, one of the first things we noticed out of order on No. 12 was its firebrick. Between years of service and the trailer ride from Colorado, the bricks, although adequate for the season, definitely needed replacement.

Removing the firebrick entails climbing inside the firebox and hours of manual chiseling, air chiseling, and power descaling to remove the brick. Rex F. spent nearly all day on Friday doing that dirty task, but the results are rather spectacular. 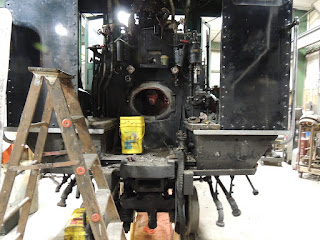 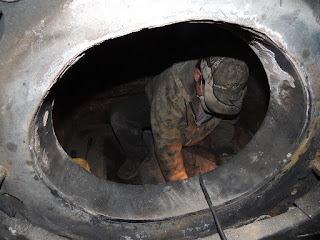 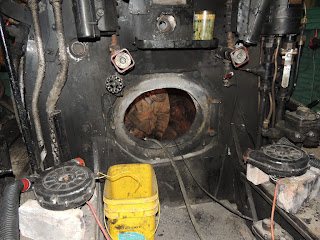 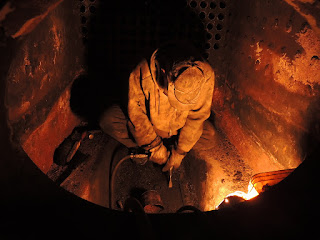 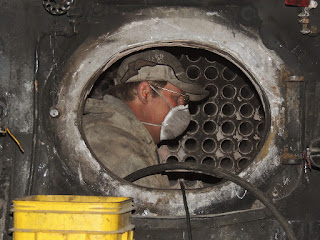 While most of us were paying attention to No. 12, Chris P. decided the self-removing windows on No. 101, our gasoline Vulcan switcher and affectionately known as "the Squirt" (although it has "Little Squirt" lettered under the cab windows) needed some help. Last month the Squirt gained a real muffler; this month it gained new glass, rebuilt frames, and a side view mirror to assist the engineer. 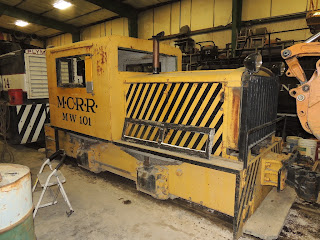 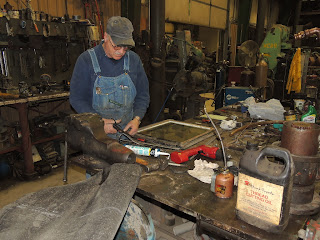 The engineers were less than pleased with the action of No. 12's throttle, especially with its low speed control. The low speed control is essential for our operation during Midwest Haunted Rails and North Pole Express.

To gain access to the steam valve, we removed the steam dome lid... 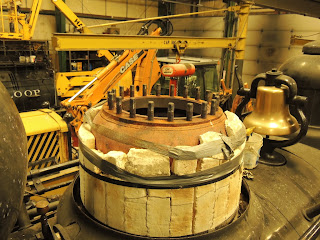 ...and placed it on the floor next to No. 12. You can see the large whistle still affixed to the lid! 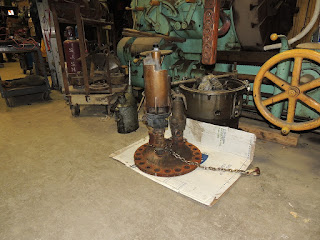 If you are wondering what it looks like "down there" you can see the steam valve, linkage, and flues.

There was a massive amount of play in the linkage. The engineer's steam throttle moved about 6" at the handle before the steam valve actuated! No wonder the engineers were having a fit. 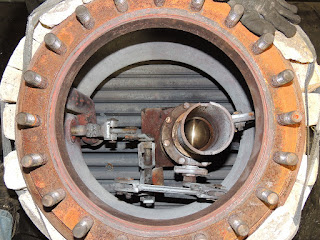 The steam valve is not the original Baldwin valve; somewhere in this engine's approximately 80 year history, the normal spool valve went missing and a large ball valve was fitted in its place. Besides the massive amount of play in the linkage, ordinary ball valves lack a uniform increase of fluid flow as they are opened. Fixing the linkage is relatively easy; fixing the ball valve is something else. At the present time, we are likely to install one of our spare spool valves in place of the ball valve.

Another focus point on No. 12 is its air compressor. When not pumping air, a large stream of steam was constantly venting. When it was pumping air, lots of steam spewed from every crack and crevice. The staff removed the pump to inspect and repair any mechanical problems. There is an excellent chance we will exchange the single cylinder pump for a cross compound pump similar to the one on No. 6. 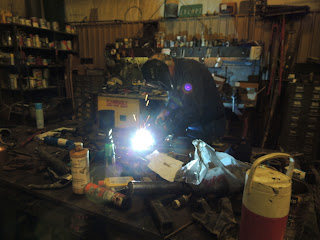 With the hoisting bracket installed, some of the surrounding walkway removed, and all of the various pipes uncoupled, Elliot H. attaches the overhead crane to the lifting bracket. 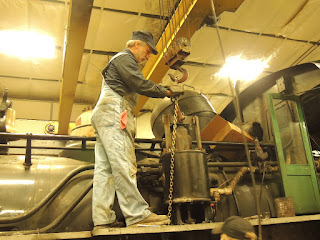 Rex F. and Randy V. continue the positioning of the compressor to a spot in front of the welding table. 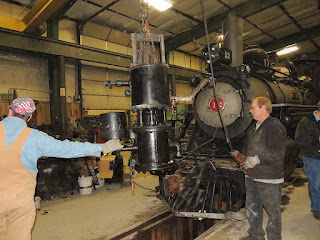 In order to free the overhead crane, Elliot H. and Rex F. fabricated a stand for the compressor. The stand allows access to most of the compressor. By leaving the lifting bracket on the steam cylinder head, the compressor assembly can easily be moved to a different location in the shop. 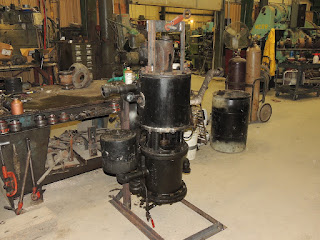 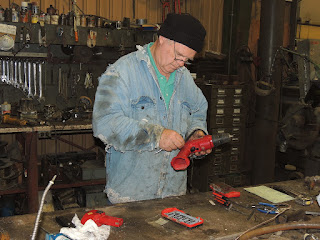 Wayne P. cleans the burner from No. 6. 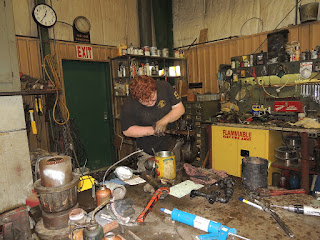