Most of the MCRR Board of Directors visited a trade show in St. Louis for the upcoming "Midwest Haunted Rails." While the BoD members were at their trade show, the MCRR "mechanics" (also known as the "volunteers") worked on various projects in the shop.

No. 12 was the focal point for the weekend.

Last month, No. 12's single cylinder air compressor was disassembled and several problems were noted. Based on those problems we decided to install a cross-compound air compressor that had been rebuilt by "Shop Services," a commercial entity co-located with the MCRR many years ago. The air compressor had been stored at the south end of the shop and for years was more of a tripping hazard than a useful piece of equipment. (Perhaps it was simply awaiting the "right" locomotive?)

Last month the cross-compound compressor was moved to a position behind No. 12's cab. This month it was tested with shop compressed air and installed on the fireman's side of the locomotive.

Rex F. and Roger R. inspect, lubricate, and attempt to get the compressor working. Supervising the labor was Board member Chris P. The years of doing nothing caused some of the compressor's original lubrication to become sticky and in a few places, solid. 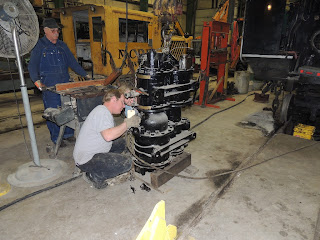 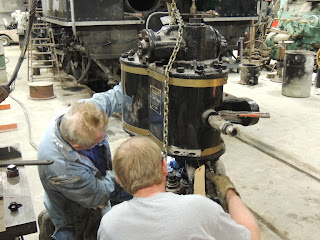 As Rex and Roger were working on the compressor, Elliot H. was preparing the side of the boiler for the installation. The boiler mounts were designed for the cross-compound compressor but had been adapted to the single cylinder compressor while at the GLRR. The brackets were removed, labeled, and stored with the other pieces which had been removed last month. 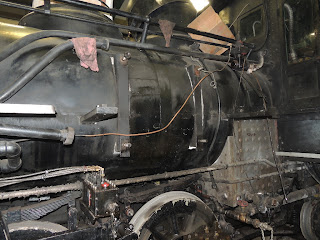 With the boiler mount ready and the compressor cleanly cycling on shop air, the staff used the overhead crane to move the compressor to its new location. 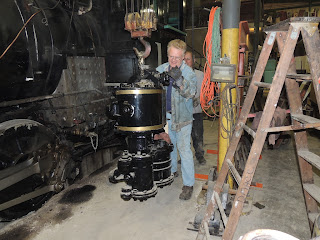 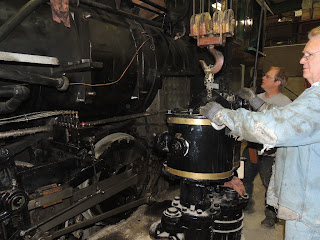 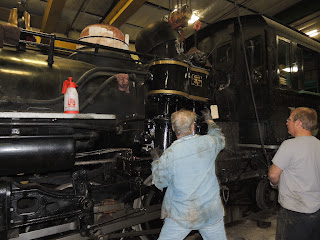 With little fuss, the cross-compound compressor was bolted in place on No. 12. That was the easy part! 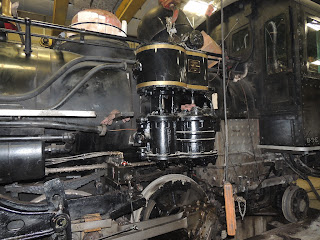 Unlike the MCRR, whose track "layout" is in a relatively flat city park, the GLRR's track system is up a fairly steep mountain grade. The locomotive works hard to get to the top and then the operator spends most of the time applying the brakes on the way back down. Applying air brakes causes the compressor to cycle, which for a "normal" compressor installation causes excessive smoke box drafting, often snuffing out the fire or causing the boiler's pressure to become higher than desirable.

The GLRR had modified the compressor steam exhaust system on No. 12 to suit their operation. Instead of having the compressor vent through the smoke box, the steam was vented outside behind the smoke stack. Perfect for the wide open areas in Colorado but rather noisy for our operation in Mt. Pleasant. Have a "look and listen" at this video and you will know what is meant by "rather noisy." The snorting is quite prevalent as No. 12's compressor is cycling while the air brake system is demanding pressure.

Solution? Reroute the compressor's steam exhaust through the smoke box. The size of the smoke box becomes a better muffler and the locomotive gets loads of free boiler draft in the process! Rex F. disconnects the brackets holding the exhaust pipe to the smoke stack. 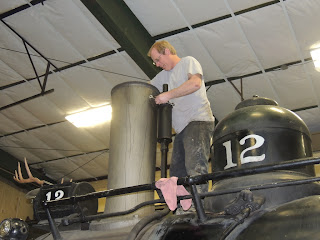 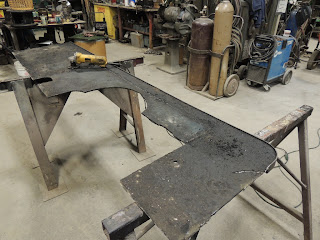 In order to route the compressor exhaust through the smoke box (as Baldwin intended!), the pass-through port had to prepared for use. After removing the plug, Griffin W. and Roger R. rethread the fitting to accept a 2 inch bushing. 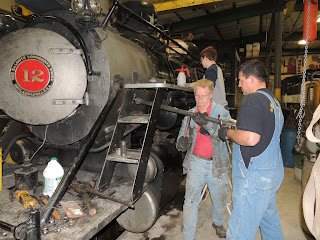 The ongoing boiler shell cleaning project continued as the other mechanical work was taking place. Jeremy L. removes baked on dirt and grime from the front sand dome. 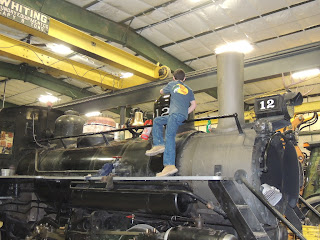 If the mechanical work on No. 12 wasn't enough, another group moved the boxcar from Museum "B" to the shop. The boxcar, before its acquisition by the MCRR had been partially restored, including a new paint job. Since the boxcar was in a static display, only one side was lettered. One of the spring projects is to get it lettered on both sides.

Getting the boxcar from the Museum building to the shop was more work than expected. Recent March snows caused a mess on the tracks connecting the two buildings. The crew spent more time digging the rails out than moving the car. 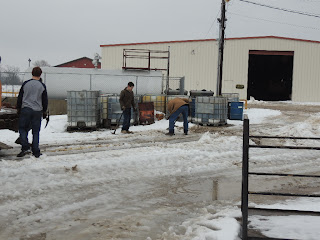 The Vulcan gasoline switcher proved to be the ideal locomotive to get the task done. 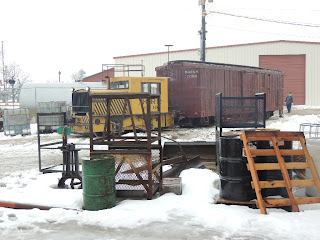 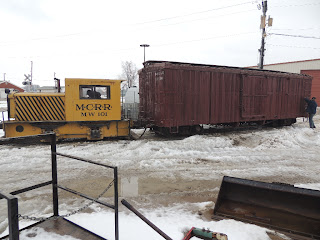 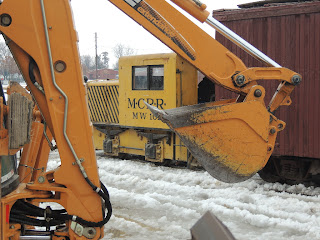 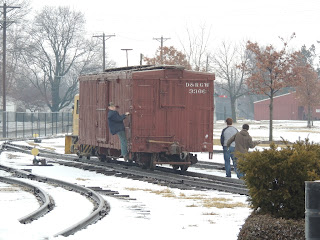 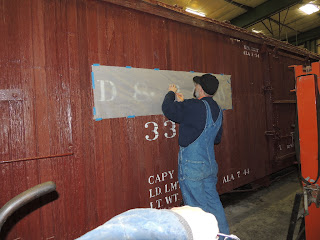 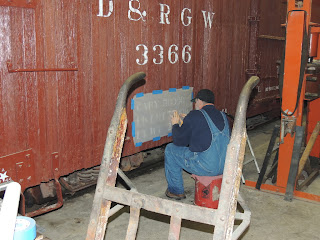 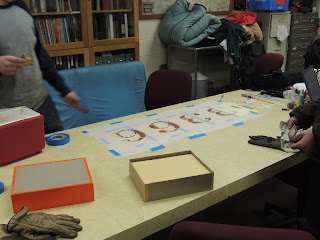 The new routing for the steam exhaust and the air pressure connection was completed. The last major task was installing the air intake manifold to the cross-compound compressor. A manifold was easily located in the shops archives but the two flanges that connect the manifold to the compressor body were nowhere to be found. Griffin W. fabricates new flanges to complete the manifold's installation. 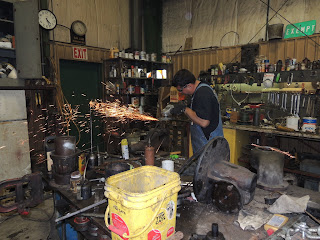 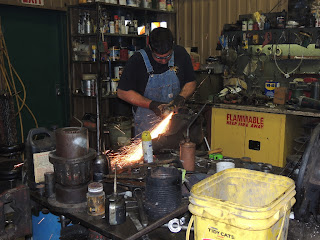 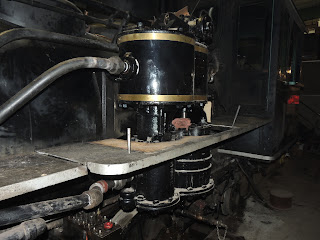 Look carefully between the middle step and the running board and you can see the compressor's steam exhaust passing through the smoke box wall. 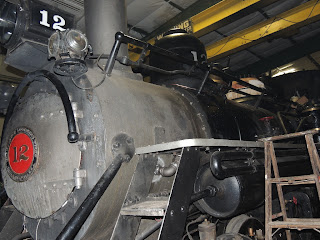 The steam exhaust and air pressure output pipes lead away from the air compressor to the existing piping on the locomotive. 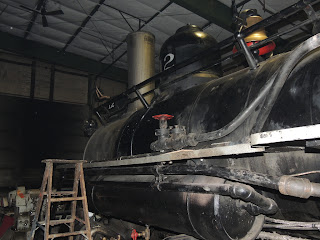 Did you ever wonder what the inside of a boiler looks like? Matt W. climbed inside No. 12's boiler and took some spectacular pictures.

These two pictures are looking backwards towards the firebox. The firebox stays are quite vivid. The pipe along the top is the steam line for the accessories. 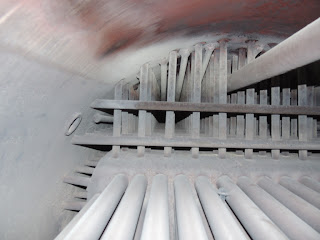 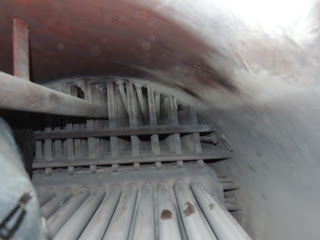 Looking forward towards the front flue sheet, the dry pipe is suspended from the top of the boiler. The eerie grey color is the result of our advanced boiler treatment. The treatment contains a polymer which coats the boiler's insides preventing rust. 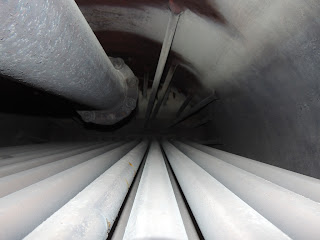 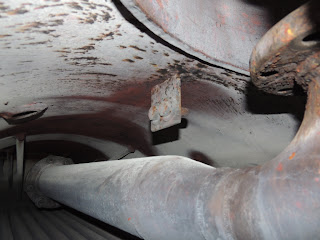