Work continued on the 6’s boiler: the flues in the firebox were seal-welded to prevent leaks in case the fire went out and cold air was drawn through the flues. There was quite a bit of weld around the flues so it took quite a bit of grinding to remove it. When I arrived there on March 13th over half of the fireboxe’s flue ends had been knocked out thanks to volunteers Griffin W and Dustin B. Paul K and I continued to knock more flue ends out of the firebox fluesheet.

While Paul and I suffered from the flue, Jesse V, Griffin W, and Dustin B performed track work as well as work on the 9 (Shay). “Shop Supervisor” Mike E showed up and worked on the 16 (Henschel).

Jesse V working a part for the Shay. 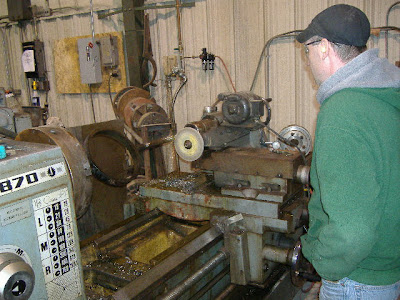 John G using an air chisel to knock flue ends out of the 6’s firebox fluesheet. 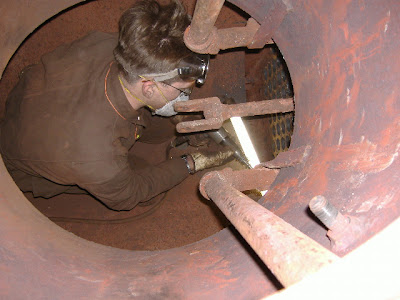 Jesse V, Dustin B, and Griffin W examine a part from the Shay. 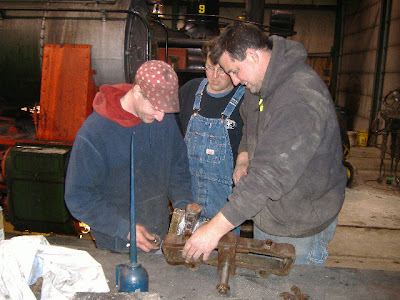 After removing something heavy from the Shay, Griffin W passes it to Dustin B for safe keeping. 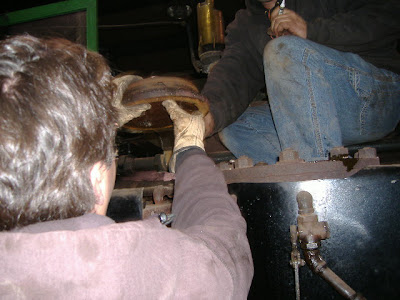 The work continues on the Six's boiler preparation. Besides exposing the twin disc housing on the D-9, the staff still had hours of work to be done on the boiler to get it ready for shipping to the boilergeist.

The previous post, "The Boilerzoph," described the process to get the boiler from the frame to the floor. These few pictures show the remaining firebox cleanup/cleanout taking place.

Volunteer Anita N. scoops containers of debris from the firebox. The debris is from the removal of about 1/2 of the fire brick. With hours of work still to go, discovering where the firebox's floor was located proved handy. Anita removed about 30 1-gallon coffee-containers worth of gravel and brick chips. 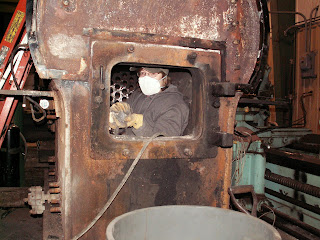 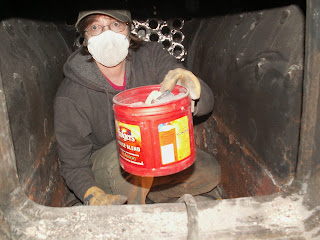 Volunteer Elliot H. realized that the trash barrel was impossible to grab so the debris was transferred to a barrel with handles. 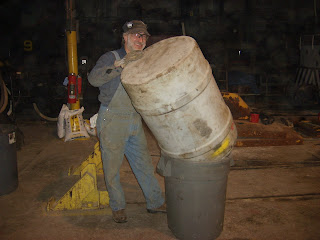 As punishment for filling the wrong trash barrel, Elliot H. is placed inside the firebox (after Anita crawled out!) and ordered to finish the brick removal. 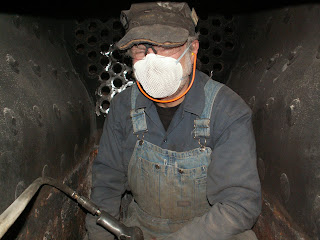 Removing many of the bricks required splitting the brick and then forcing the air hammer's blade under the brick to dislodge it. The bricks were installed over 20 years ago as a way of moderating the heat from the oil burner. There were two courses of bricks approximately three feet high on all four sides of the firebox. The installers did a masterful job of placing the brick, using a minimum of mortar to fill 1/8 inch gaps between bricks and courses of bricks. 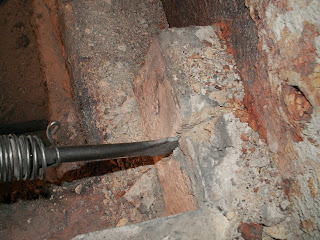 The firebox looks "large" in the above photos, but keep in perspective just how small the Six's boiler really is! 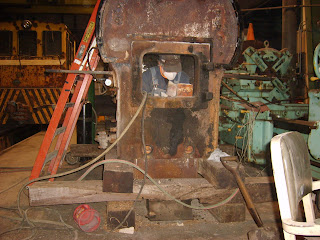 Everybody gets into the act! After chipping several courses of bricks, volunteer Bekah N. jumps in the firebox to remove the debris created by an hour of chipping brick by Elliot. 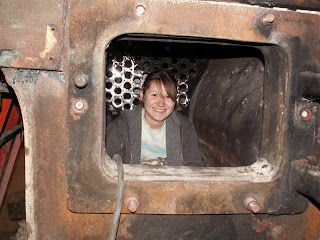 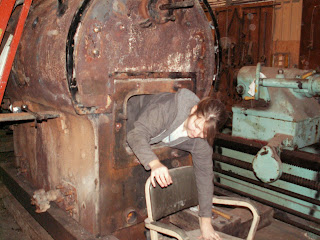 After an hour's work, this pallet has the larger pieces of brick removed from the firebox. 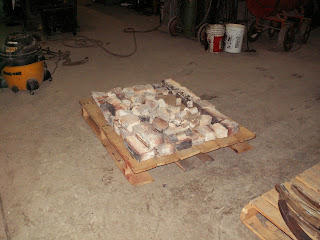 After a few more hour's work.. 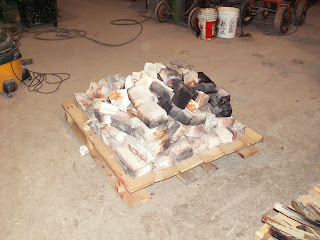 After ripping the Six to shreds, the staff at the MCRR realized that the usual cushion of 4 working engines ("Six,", "Nine,", "Sixteen," and "Fourteen") was down to three -- and that several in that group were questionable!

The decision was made to do a minimal restoration (lots of cosmetic and some mechanical) to the twin of the Fourteen. From this author's understanding, the Fourteen and this beast, the "D-9" were part of a coordinated purchase about 20 years ago. Of the two, the Fourteen was in better mechanical condition and was selected for restoration. The D-9 was to serve as a cadaver if parts were necessary for the Fourteen's restoration.

Both engines were manufactured by the Plymouth Locomotive Works. This company built small switch engines (steam, gasoline and diesel) until the late 1990's. Plymouth Loco Works was located in...Plymouth, Ohio!

One of the reasons for not selecting for the D-9 for restoration 20-odd years ago was due to its ferocious leak from the twin disc (torque converter?) housing. While first thought to be the rear main bearing seal on its engine, the recent effort determined that the engine was fine and the leak was coming from beyond the crankshaft.

In anticipation of the diesel mechanics removing the twin disc housing, the shop crew's February task was to remove anything that blocked access to it.

As can be seen in the following picture, the D-9 had seen better days. The date of this picture is unknown; it easily could have been taken last summer, but it has been displayed on the MCRR's website for several years. 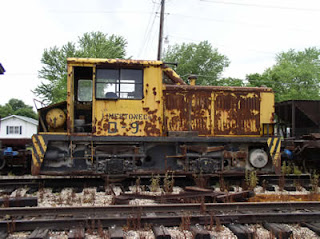 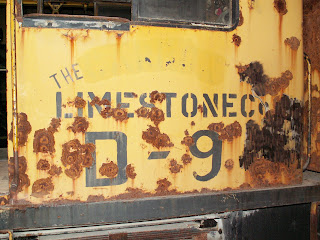 After removing the doors and the bolts holding the front hood in place, MCRR volunteer Elliot H. removes the electrical connections to the headlight. This picture was special because it was one of the few items removed without an air impact wrench. 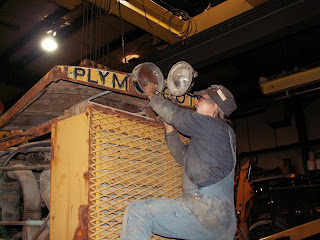 A engineer's side view of the engine compartment. The air cleaner and sand hoppers are still in place in this picture. 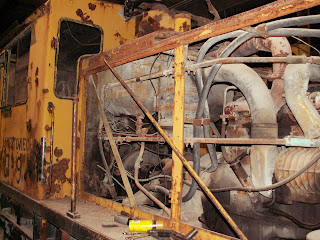 Dave O. and Dan H. torch and winch the sand hoppers off the frame. Oddly, everything impeding access to the torque converter was bolted in place except for the sand hoppers. Numerous angle irons were welded to the D-9's frame and required some tight torch cutting to free the hoppers. 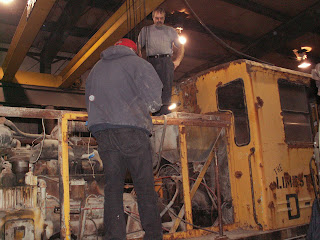 The hoppers dangling from the overhead crane. It almost looks like a kitchen sink! 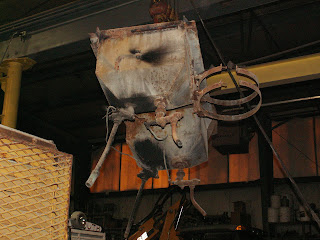 This is a good portion of the parts removed from the front of the D-9. The rear of the Fourteen is in the background. 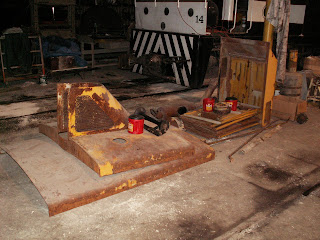 Engineer's side view of the D-9. This thing looks like a real disaster, but the engine does run good. 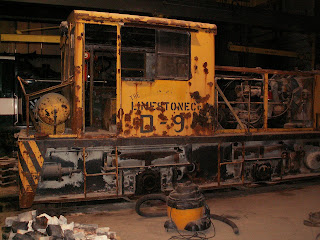 Fireman's side view of the D-9. 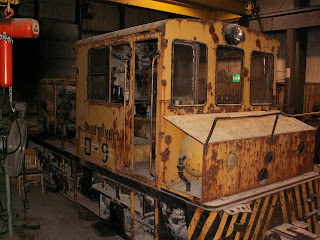